So, I've been thinking that I should do some proper writing. You know, hard hitting journalism that really gets down to the nitty gritty of the subject. This now being the case, I've interviewed one of the 'New Kids on the Blog' Nathaniel Southwood, AKA @NateDawg27 in the Twitterverse, he writes the blog Booze, Beats and Bites and he is more awesome than you....apparently.

RBF: Who's your inspiration when it comes to blogging?
ND27: Brewers, food producers and musical artists. Bloggers who make me want to write, however, are purely beery ones - Mark Dredge, Zak Avery and Pete Brown always have interesting blogs. They were the first beer bloggers whom I really paid attention to.

RBF: What do you want to be when you grow up?
ND27: When I grow up? Bitch please. Nate Dawg is already grown up. I would like to work in the beer or music industry though. Someone told me the other day that I could be a lawyer because I'm a bit of an arsehole, so there's always that.

RBF: What does 'craft beer' mean to you?
ND27: Craft beer is something I drink. It is almost always highly priced, barrel aged and limited to 50 bottles.

RBF: Booze, beat and bite. If you could only drink one beer, eat one meal and listen to one song for the rest of eternity, what would they be?
ND27: Carling, McDonalds Double Cheeseburgers and Rick Astley - Never gonna give you up.

RBF: Carling or Brewdog, rain or shine, glass half empty or glass half full?
ND27: Brewdog. Shine. It depends whether you've poured water into an empty glass or poured half a full glass out...

RBF: Favourite beer moment, ever.
ND27: Wacken Open Air 2008. It was my 4th time seeing Iron Maiden. I was sick of drinking litres of Becks all day. I found that there was something different on draft, Franziskaner Hefe-Weissbier. I paid for my drink and sat at a table with some other English folk. Then it started. Videos of fighter jets from WWII on the screens, so haunting. Then it progressed. Churchill's speech...

I mouthed the words to Churchill's speech. As soon as I heard "never surrender", I heard the opening riff to Aces High and took a sip. That sip was glory. That was what the British fought for. To drink German beer. In a field in Germany while watching a British band live with people from all around the world - Brits, Germans, Swedes, Danes, Russians, Americans, Aussies and Spaniards; I was drinking beer with people from all backgrounds, religions and races; I was watching my favourite band and drinking beer with like-minded people. We fought for the music and the beer. We fought so the world could be united. We fought so that I could have that beer moment. That is my favourite beer beer moment ever. The Fat Cat in Norwich has Franziskaner on draft permanently and every time I buy a pint I almost have a tear in my eye for that awesome moment. Absolutely phenomenal. You probably can't feel how I felt right then, but here's a recorded example - http://www.youtube.com/watch?v=37UPhgEqwN8.

That last question seemed to be the hardest. It's hard to write about something so special as it wasn't just about the beer. It was a truly emotional moment for me.

I'd like to thank Nate for taking the time to answer such hard hitting, personal questions, I think we've all learned something today and hopefully you'll go away and take a long hard look at yourselves... ;)

I got home last night and found this on my doorstep... 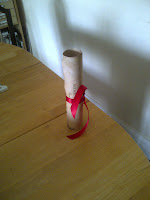 Now, ordinarily beery invites don't come in rolled up scrolls so well done to Krusovice for making the effort.

But rather than having the postie dump it on my doorstep, why not go the whole hog and get a traditional messenger on horseback to deliver and read it to my court...

No one takes any pride in their work any more, take note Royal Mail/Consignia or whatever you're branded as now!
Posted by rabidbarfly at Tuesday, June 19, 2012 6 comments:

Usually I wouldn't post work stuff on here but we've got a couple of events coming up at The Rake which I'm pretty excited about so I'm going to share them here too! 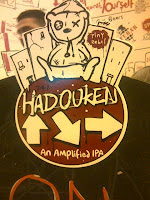 Firstly in a 10 days time - Sunday 24th we have the Tiny Rebel Tap Takeover. You're probably aware that I went and brewed with Newport's only microbrewery about a month ago and true to form/unsurprisingly we brewed a 7.4% IPA which was named Hadouken.
On the 24th you will be able to try the Hadouken from keg or cask dispense and decide which of the two you prefer!
Being a Tap Takeover there will of course be 4 other beers on for us  to sample as well, I say us becuase there are a couple that I still haven't tried myself! Exciting!


Imbibing of these awesome Welsh Beers starts at Noon on Sunday 24th June. See you there!


The other exciting event is approximately three weeks later on Monday 16th July when The Rake hosts the post grad Heriot-Watt students launching the beer they have brewed at the Natural Selection Brewery at Heriot-Watt Uni. 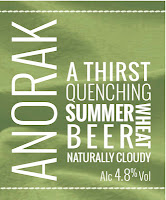 I got a phone call from Shane O'Bierne at the beginning of the week asking very nicely if they could do their London Launch (The Edinburgh launch is on 11th at the Stockbridge Tap at 7pm ) at one of the best beer bars in London, well flattery getting you everywhere I said yes almost instantly and we're now gearing up to get a massive hit of students and beer geeks in on a Monday night! *gulps*
Personally I find the fact that these are brewing students launching a beer commercially extremely interesting and exciting but then being an AFC Wimbledon fan I'm a bit of a sucker for the underdog and I really want this beer launch to be a huge success.
The beer? A 4.8% Wheat Beer with low bitterness but enough citrussy zing to make it perfect for those long British summers we're all so fond of!!
Proceedings start at 7pm on Monday 16th July and if you want a taste get here early before all those students drink it all!