So there I am, minding my own business sitting in a pub in Pontypridd and BAM! I'm out cold....

When I wake up I'm in the boot of a car...I think, I can just about hear muffled voices over the sound of what seems to be a sporty type engine. I am bound, I am gagged(not in a good way) and there seems to be some sort of itchy hessian bag over my head. The car screeches to a halt after what seems like an eternity and I can hear two people get out. The boot opens and they drag me outside....fearing that this will be the final few minutes of a life, once so full of promise, I try to make a run for it but it's no use, I am facing a building and run straight into it. Ouch. I'm shoved into what I can only assume is the same building and seemingly marched up some stairs....
I can hear a click, was that a lock or has a gun just been cocked? I'm shoved a bit further and sat down in a chair. The bag comes off and my eyes start to adjust to the light, the gag come off and the ties that bound me come off.....The more my eyes adjust to the light of the room the more developed my case of Stockholm syndrome becomes, for I am in a room full of beer... 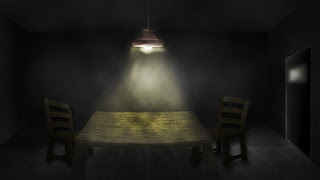 So a couple of weeks ago I got an email from Nick Otley titled : Brewers Vault. Instantly my interest was piqued, whose wouldn't be? The chance to try lots of rare, aged or just plain strange beers! Kid in a candy shop sprang to mind!

The rules are simple enough...


The numbers I picked were...

1) Obviously being the first person invited into the vault I had to pick number 1 first. The beer in the bottle was an O1, brewed in September 2010. It had taken on an oak-aged character which we all agreed was very nice!

74) The year of my birth, I decided that my approach would be 'significant' numbers. Loads of condition on this one, it was an O4 (Columbo) and only 6 months old but it had taken on an almost 'Motley-like' quality, tonnes of tropical fruit in there with BITS! Bloody lovely!

320) Now, number 320 was slightly different, from where I was sitting it was directly in my line of sight and the number label was an inch or so lower than all the other bottles in the vault - a mistake but as it turns out a happy one! The beer in bottle 320 was none other than Pete Brown's collaboration, Odessa(Mead). During Pete's pub crawl when it was launched in London, it was the only version I didn't taste. Not as sweet as I was expecting and the mead characteristics made the beer that more...er...moreish!
Just to let you know, the last of the Odessa is in that little vault so if you get invited don't do anything stupid like, say no.

39) Back to significant numbers, I'm in my 39th year on this planet and I managed to pick Otleys comedy beer, an aged Oh Ho Ho, also from September 2010, there were some nice peppery notes to this. Quaffable!

240) A random pick and lets just say the less said the better at this point.

133) The number of the bus I take to work. I will just say this....what's said in the vault stays in the vault!

166) Another random pick and an off O1! The random picks stopped there and then!

60) It's my Mums 60th birthday this month so in celebration of that, I picked a corker of a beer! O7 Weissen, with all the hints of clove and orange peel I was getting I mistook it for Otleys other wheat beer the much improved, of late, O-Garden. But this O7 was spot on!

380) From the 1st beer on the list to what was (currently) the last, more will be added before the next visitor(you lucky people!). Anyway Hops stuck to the glass, the liquid was dirtier than a couple of hookers mud wrestling and it was blacker than the lungs of the smoking man off the X-Files. Ladies and Gentlemen, I give you Oxymoron! Fuck yeah!

333) Two significant reasons for this pick. Anyone remember Graham Gooch in 1990 vs India? Secondly anyone seen my bus?
The beer though was a special reserve, 2012 O4. Shit-tonne of hops and just a great beer to finish on!

I'd just like to thank the Otley boys(and ladies) for inviting me to be the first person to experience the vault, it was a really enjoyable couple of days down in Pontypridd...again!