Good news yesterday as international brewing monster ABInbev have come to an agreement with tiny South London micro, Belleville Brewing Co over the use of the name 'Belleville'.
Apparently ABInbev took exception because it sounded like 'Belle-Vue' of the kriek variety that the multinational produces and gave Belleville Brewing Co a cease and desist order. 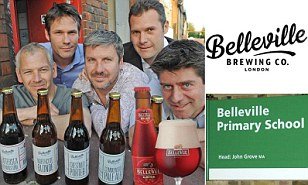 Common sense seems to have prevailed in this case though as both parties went to the table and worked out their differences. What it came down to I don't know but it's good to know that the brewery that took its name from a primary school rather than a sickly cherry beer, can continue using its current name!.

Belleville Brewing Co was set up in January this year by a bunch of parents of children from Belleville primary school, and they've been producing some very drinkable, American inspired beers since then, a change of name and branding would have cost them a fortune possibly even putting them out of business.

So here's to Adrian and the guys at Belleville. Cheers!