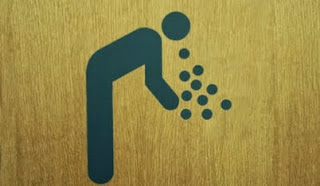 Having been reminded by the populist blogosphere that no one really gives a shit anymore i'm reverting back to type this year with the under appreciated and ever ignored Aspirational Lambics; awards so shit that no-one will want to get involved.
So if there are any hardy souls out there that still read this garbage i'm sure there won't be afterwards!

This year was particularly difficult because unlike the real fucking world where 2016 has been a car-crash, hardly anything shit happened in the beer world save the geeks here and there being total joyless fuck-nuggets; so without further ado, here are the awards for 2016.

The Lord Lucan award for best disappearing act of 2016 goes to : My soul. I grew a beard and worked in the beer industry this year, i am damned.

Best Bullshit in 140 characters : it's got pictures so @beerdoodles is top of the tree. Follow him or i'll send the boys round.

How many mega beer companies do we have to buy before we're craft : AB InBev again of course!! They finally managed to swallow SAB Miller this year but not without spitting out the chewy bits like Meantime.

Somehow managed to stay out of jail award : hate him or loathe him Julio Utter-Bastard somehow remains a free man which let's be brutally honest is a fucking surprise to us all!

The UKIP award for best beer Nazi : they're not beer nazis they're "Alt-Bier" and they're anyone with badge-wankery joy this year. Untappd users, take a bow!

The Dinosaur award for not really knowing what they're doing and mostly smelling of piss : CAMRA.

I'd rather have a Carling :  Than anything by Poppy Fields brewery.

The Donald Trump Award for spouting mostly horseshit this year : Donald Fucking Trump of course! This vitriol isn't just for beer people you know! - What a class-A Wanker he is.

If you make me drink that shit again i'll decapitate you : Guinness Dublin Porter. Gopping shit.

The Secret Guild of Beer Blaggers had their annual awards dinner last night and as suspected, prolific blagger, Pete Brown won the prestigious golden tanker for Beer Writer of The Year.....again.

This year the panel of judges decided that he should just win every other year because no other fucker comes close in their quest to be anywhere near as good as he is. Guild rules dictate that having won this year he will be the chairman of judges again for 2017 so the next time he'll be able to win will be 2018.

The guild got the idea from watching all the Star Trek movies and noticing that all the even numbered films were shit and that only the odd numbered ones were actually any good. The panel of judges said it was actually a great idea for saving money by just letting Pete win on even numbered years because they're all very busy but they begged us to not make them watch Star Trek IV, The Voyage Home again because it was almost as bad as the Rancid About Beer blog.

Pete showed extra skills by picking up the golden tankard from a Molson Coors sponsor that was non-existent. Apparently they couldn't afford the Uber fare to get from Euston station to the swanky Park Lane Hotel where the awards dinner was held.

Pete Brown is well known in his field for doing beer and music matching so we suggest that you enjoy reading this blog whilst listening to Carly Simon's Nobody Does it Better...
Posted by rabidbarfly at Friday, December 02, 2016 No comments: