Giving The Gift Of Beer Actually A Bit Wank This Valentines

Thousands of clueless bastards across the UK will today do a last minute dive into their local craft beer emporiums on their way home in the desperate attempt to find a Valentines Day gift for their loved ones. 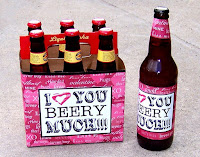 But giving the gift of beer is just a bit wank, claimed loved ones everywhere, who still hadn't even bothered to open their bottles of Christmas beer, brought at the last minute instead of something good.

Having not managed to find anything good these clueless fuckwits are gratefully swallowing the bullshit line that the gift of craft beer is better than nothing this Hallmark Day.

Even knowing the look of disappointment on his partner's face, overweight, idiot beer blagger, Rancidbarfly was seen sneaking into his local bottle shop and asking if they had any cans of Carlsberg Special Brew on offer this year but after getting a pitiful look from behind the counter he eventually settled for their recommendation of a homebrew kit.


Posted by rabidbarfly at Wednesday, February 14, 2018 No comments:

people who drink good beer are being found out as really not that good after all.

In these social media savvy days the general public are finding that these good people who drink better beer than they do aren't really that nice after all.
The Good People Who Drink Good Beer Forum on Facebook is constantly turning down people who don't know a beer from AB InBev from a craft beer made from London Fields or Lagunitas, after all it's 2018 why don't the the general public know what craft beer is yet!!

These craft beer nerds constantly call each other good people that drink good beer and are often seen congregating at their local craft beer emporiums for a chance to have a self congratulatory wank over a can of murky hop-trub made by a man with a beard who just cashed out of his hedge-fund job.

Once these good people have sipped the beer it's imperative that they then go on to rate it out of 5 stars because let's face it, only good people know exactly what constitutes a good beer.

You too can know what truly good beer is by following this handy guide to rating a beer.

*  Made by Greene King, ABV InBev, or Brewdog.
**  Cask beer made by a local brewery and not kept very well by their local pub, The Flame Under a Spoon.
***  Made by local brewery and is actually a good beer but it's just not cool enough to score 5 stars.
****  Made by a craft brewery who have been around for more than 5 years and used to be the cool kids.
*****  Made by a brewery who claim to be so small they're limited to making 8 cans of beer per batch and charging the fucking earth for it, or Brewdog.

So if you consider yourself to be a "good person" who drinks "good beer" please remember to join a forum where you can slag people off for having tastebuds and opinions and rate the beers by following my handy rating guide above. You might also want to join other US based websites where you can show yourself to be an international "good person" for everyone to see.
Posted by rabidbarfly at Sunday, February 11, 2018 No comments: