Hundreds of destitute landlords across the uk are calling for the government to not have a #NationalTimeOut on rents for the hospitality industry as they desperately need the money, for like investments and stuff.

With pubs bars and restaurants closed and most breweries only doing very limited capacity during lockdown landlords are still charging full rents on many businesses as they look to profit as much as possible during these trying times.

The rationale that these poor landlords are using is that if people can afford to stock up on loo roll, face masks and rubber gloves then surely these craft beer businesses make more than enough money to pay their rents; after all their customers are drinking more than ever before, so what if they're at home instead of in the pub!

The craft beer industry replied with a collective "SHUT UP AND TAKE MY MONEY!" as it went down the shitter leaving thousands unemployed and the beer industry back in the glorious 1970s. 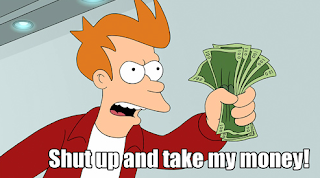 Now obviously this is just badly written satire but there is a serious issue here; the majority of the hospitality industry is still being charged rent which is in turn putting jobs and livelihoods in jeopardy, this includes clients of mine, favourite pubs, breweries and restaurants of yours so please click on this link and support the #NationalTimeOut initiative.
Posted by rabidbarfly at Monday, May 04, 2020 4 comments:

After a little over a month of being incarcerated locked down in his own home, our favourite beer idiot, Rancidbarfly has been living up to his name.

With his sleep patterns all over the place things came to a head at 3am this morning when, whilst wide awake he managed to sit through almost three whole episodes of Brews Brothers on Netflix.

With the premiss being two antagonists run a brewery with all manner of illegal, slapstick shit happening from day to day the program is based in a craft brewery, tucked away in a shitty neighbourhood of LA and not doing very well.

Rancid finally had enough at almost 5.30am having watched "inverted commas" nearly three episodes. The only thing he could remember was 1) piss in beer, 2) food-truck sex and 3) underage brewery manager. Other than that Rancid's brain appeared to not take any of this nonsense in a fit of pique he tidied up the front room, put the recycling out, showered and once dressed looked for actual work to do.
Remembering though that the UK is still in lockdown and his work had completely dried up, his brain had the idea of at least finishing the series of Brews Brothers. Rancidbarfly then did something he never usually did, he took the more sensible option which at 5.47am precisely, happened to be trying to Facetime the speaking clock.

Posted by rabidbarfly at Tuesday, April 21, 2020 No comments:

Let's try "Dry Covid" - Lockdown is the time to kick our nations alcohol habit for good!

Writing an opinion piece in The Independent, which had a lazy picture with shitty mass-produced beers in it, Ian McDonald suggested that alcohol was a luxury and everyone apart from alcoholics should give it up during the Coronavirus lockdown.
His argument that off-licenses should not be classed as essential services really got the British people rallying together in a way that not even a Tory government can!

Of course the beer Twitter community were completely on board with this and comments started flooding in, as soon as the article was published online.

Our very own Rancidbarfly led the praise with comments like "Get fucked, and when you're done getting fucked, go get fucked some more".

Chairman of the Secret Guild of Beer Writers, Pete Brown replied to the article with "let's not and pretend we did" which seems entirely too reasonable.

Our personal favourite though, was a headline from the Drinks Business "Supermarket sees booze sales rise 22% following on-trade closures" nailed it lads!

Even regular-hateful non-beer-Twitter got involved with comments like "Get in the Sea" or "If you think I'm stuck indoors, homeschooling my kids whilst sober, think again".

Never before has one man been so hated in one day and that's really saying a lot with Piers Morgan and Donald Trump also both still drawing breath. It's almost as if this British "journalist" has never met any other British people before, you want to get out more son, go mingle.


A message from our idiot overseer...
In other news the whole world is staying indoors now, it's "on trend" or something wanky like that so do the world a fucking favour and join in.
Posted by rabidbarfly at Monday, April 06, 2020 No comments:

First came the plague. Then the government made a suggestion that people stop congregating in public areas, which naturally people ignored because fuck it, if they didn't feel ill then dammit if others did.
When the plague didn't miraculously end with these forthright measures laid out by a man with silly hair wearing a clown suit, said man then insisted that people stop going out to public spaces "oh well if you insist...." said the masses as they went about their business.

Idiot beer blagger, Rancidbarfly for once is seeing the positive side of life through the rose tinted specs of self-isolation.
Talking on Twatter earlier today, our hero told of the mercy of not having to actually leave the house any more "I'm really relieved actually, what many people don't realise is that I'm not really a people person" he said sincerely.
When asked if he would miss going into pubs now that they'd been closed he replied "I'll miss telling the wife that I've nearly finished my pint, that was kind of funny, we always laughed when I came home three hours later having pissed myself in the pub, well I did, at least".

Commenting on the panic-buying in supermarkets "I mean I can see why people are buying shed loads of bog roll, they're about to start eating their own cooking again instead of getting ObeseEats deliveries every night.  I'll be ok though, I'm about to start wiping my arse on the neighbours cat".
Posted by rabidbarfly at Monday, March 23, 2020 1 comment: 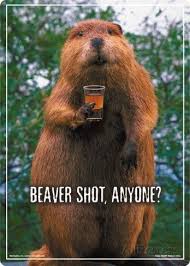 A beer blagger today had to go and have a lie down after becoming exhausted from watching lots of awesome folks running the London Marathon.

Idiot beer blagger, Rancidbarfly was taking time out from being generally shit at life to watch thousands of people raise money for charities and be all generally awesome and inspiring but he only managed to get wheezy and sweaty just from watching the event on television.

"Things came to a head around 23 miles into it and I started feeling dizzy and had to go and have a lie down for a few minutes" he said sweating profusely and taking a drag from his Ventolin inhaler.

With nearly record temperatures outside and a lounge window that gets the sun all day, our hero decided to get the full London Marathon effect by turning up all the heating in his flat too. "If this didn't help me lose my beer belly I don't know what will!" he exclaimed profoundly.

Luckily for Rancidbarfly he had a fridge full of crafty beers with which to rehydrate and he was back in the race after a quick power nap!

Posted by rabidbarfly at Sunday, April 22, 2018 No comments:

A natural occurrence today caused an outbreak of heatstroke in bartenders everywhere. The
phenomenon known only as 'the sun' is a well known cause of sick days everywhere and this year it seems bartenders have been particularly badly affected.

Sitting in his local crafty beer dive, The Snake in the Craft, beer blagger Rancidbarfly noted that it was taking an inordinately long time to get served due to the utter lack of staff behind the bar.
Whilst waiting for the lone bar tender to get round to him he noticed one member of staff actually waiting to be served.

"When I asked whether or not the member of staff should be serving instead of drinking I was told 'I'm taking a sick day, innit. I've got heatstroke' and it seemed completely plausible to me due to the temperature rocketing to a yearly high of 23 degrees outside". He continued "I felt so sorry for the poor lad that I even bought him the lager shandy he was waiting for and told him to get well soon and stay hydrated by drinking lots of fluids".

With the heatwave expected to last all week pubs and bars are bracing themselves for more staff shortages and have started calling in agency staff in an attempt to get customers served more quickly but customers will have to bear the brunt with prices expected to go up even further to help pay for them. On the plus side nobody is dying of radiation poisoning brought on by the nuclear fallout from Donald Trump's latest tweets; yet.
Posted by rabidbarfly at Wednesday, April 18, 2018 3 comments: