At Least They're Decent People Though, Right?

Indecent people all over the UK yesterday failed in their attempt to keep the UK from Brexiting* the European Union.
Thousands of devastated naked people are currently making a plan to move to Scotland or Northern Ireland in a desperate bid to stay European on account that most Brits are fucking idiots; but at least they're decent, eh?

The Crafty beer movement is said to be in real jeopardy now as decently clothed people won't be able to afford the price of imported beer as the pound slipped to it's lowest since the Thatcherite dark ages. Not that 'decent people' ever drank it anyway; no they're far too hard working for that sort of nonsense.

Call me Ham-Face even had the balls to step down, paving the way for Bojo The Clown and his gang of merry Goves to take control and send the world spinning towards World War Z with Bojo on one side and Drumpf on the other. At least they are decent people though, eh?

UKIP leader Nigel Far-right, last seen celebrating with a pint of Greede Kerching has yet to grasp the concept that he's now obsolete having formed his party to break the UK out of the evil clutches of the European union, even half-witted idiot beer blagger, Rancidbarfly can see the irony of that!

Apparently the indecent masses are planning a mass naked protest in Trafalgar Square on Tuesday as a reaction to losing the vote in the naive hope that it might make the blindest bit of fucking difference.

There's nothing like a pint at the end of a hard day at work and at £3.79* you can drink as much as you fucking like, reported The Mirror yesterday.

Apparently Sunday was a slow news day as they instead chose to share a story by one of their artisanal beer experts which was just a reaction to reading a tweet by a local councillor in Chorlton, up north somewhere.

British drinkers love a pint but how many of them would get their wallets out for an ale selling at £15 a go and it wasn't even in that London or even one of them foreign beers!
No it was Inhumane Cock & Balls, by Magic Mike's brewery again, up north somewhere. Apparently there's a stylish bit of Manchester now where all the London youngsters hang out and at the imaginatively named The Bar, this monstrosity of a beer was on! Do they know NOTHING!!?? There is no stylish part of Manchester!

The tweet that this garbage came from simply said 'for those of you with too much money. A £15 pint in The Bar #Chorlton'.

HA! Shows what he knows! There's no such thing as too much money!!

The Mirror continued anyway with the tasting notes for Inhumane Cock & Balls, even though they were merely copying someone else work...again. Not that anyone cared what this beer tasted like, they just wanted to see pictures of celebrities drinking it in their favourite mind numbing reality show!

Then they bleated on about a study or something that was done on the price of beer last year Apparently in areas with higher incest rates the price of beer is a lot lower so in Herefordshire the average price of a pint was only £3.10 but your sister is your mother...or something; whereas in London where we tend to do less of that sort of thing, it was generally 82p more expensive. Less incest, more expensive beer, i can deal with that.

Then they continued moaning about a Swedish beer which was on sale in some Shoreditch dive being £7.50(the same price as a half of the Inhumane Cock & Balls).

Going that extra mile to alienate their readership(most of whom were only there for the pictures) The Mirror then started quoting the Good Pub Guide, a publication from The Campaign Fo' Real Ale in which the author tells the membership where they can tick off their beers in the cheapest way possible; and that was generally the north of England, after all it's just like a really really cheap version of London with people that talk to you on public transport!

*Let's assume they were talking about the Carling and Guinness which their Artisanal Beer Expert dragged out as examples of ABV. Well done author, you can read a pumpclip.

Posted by rabidbarfly at Tuesday, June 21, 2016 No comments:

Craft beer trolls all over the UK rejoiced today as two of their favourite henchmen, James Watt and Martin Dickie were given Sainthoods in the queens birthday honours.

Mr Watt, who now wants to be called Saint Punk of Craft Beer said 'to have been awarded something so prestigious is well (t)rad'.
Mr Dickie, could not be found to comment that he is already making his staff call him 'Saint Crafty of crafty brewers'.

The Queen herself was shocked that she was getting criticism from the dirty left wing republican types and defended her divisive choice by saying that if the Pope can canonize people then as the head of the Church of England she was well within her rights to 'saint' two such admirable young men who have been turning water into beer since 2007.

It was widely reported on the BBC today that the main reason for Sainting these two people was because they once made a beer called Speedball, the drug cocktail of choice of royals for many years now.

Other critics have spewed on social media that making the Queen get up at 5am just to saint two brewers (well one brewer and a marketing chap) was just being mean to a kind old lady who gives and gives and never asks for anything in return....apart from palaces and more money than she knows what to do with...

Fullers 'I Could Do That' Day A Hit With Old Blokes

Well known family brewer, Fullers are celebrating fathers day this June by running a competition called 'I Could Do That' day.
Aimed squarely at blokes who have always wanted to run their own pub but never had the bollocks, 'I Could Do That' day is predicted to be a massive hit as they are under the false impression they'll be able to show the bar staff how to pour beer properly before having to admit that they actually don't have a fucking scoobie.
The winning bloke will also have the opportunity to try and remember more than one drink at a time on the order whilst being shouted at by three different customers and trying to figure out who was actually first at the bar, regardless of which type of banknote is being waved in their faces as they try to put beer down without spilling it; and for that extra 'I Could Do That' authenticity they will be able to experience the asshole that orders Guinness last before telling said asshole that they don't serve Guinness here, just crafty Fullers stout. 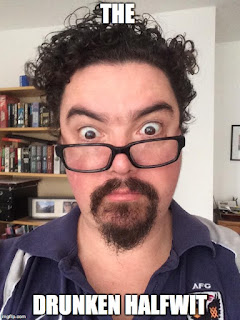 The competition will also involve the winning blokes face and name on the pub sign and his favourite food groups on the menu.
Middle aged beer blagger, Rancidbarly is said to be disappointed that he doesn't qualify due to not having impregnated some random years ago as he was looking forward to having his favourite food stuffs on the menu at his local which would have read a bit like this...

When asked what he would have called the pub had he been allowed to enter, and won, our favourite crafty beer hero replied 'The Drunken Halfwit'.

Entries can be made on the Fullers website where people can upload pictures of their old man and tell the family owned company why their dad should win in 140 characters or less. Apparently 'To get the grumpy old bastard out of the house' is the most popular answer so far with a massive 5m entries.
Posted by rabidbarfly at Monday, June 06, 2016 No comments: