When looking through my blog reading list, I often see the Barons titled 'Looking Forward to...' on the list; this means he's been sent beer that he can't try right away.

This is my Looking forward to blog.....

I'm looking forward to the first beer festival to be held by AFC Wimbledon! Yes a much brighter note than the last beer and football blog i wrote.

Apparently the festival is being run in partnership with the new Wimbledon brewery and there will be 40 ales, Ciders, Perries and Craft Beers available from local and regional brewers.

For anyone interested in meeting up for a beer, i'll be going on the Friday night after work. Hope to see you all there!

In that London anyway; apparently i'm not allowed to sit around in Cape Town pretending to be a writer anymore and i had to get a job. So I did. I sent an email to the London Brewers alliance and some of them thought i might be worth employing! Who'da thunk?

Even though I'm not really 'salesman material' i'd really like to thank the brewers who thought i would do a good job for them, it meant a lot that they thought highly enough for me and when you've been out of the loop(circus) for a while it's nice to know people remember you.

There were a couple of jobs that interested me but one really excited me; nailed down that was the job i wanted as soon as Duncan offered me it. Talking to Duncan and Sean at Sambrooks is an enlightening experience; for starters the brewery was a lot bigger than i was expecting. Having an extended chat in the bar looking over the brewhouse i got the distinct impression that these chaps wanted to do things the right way, not the easy way but the right way! 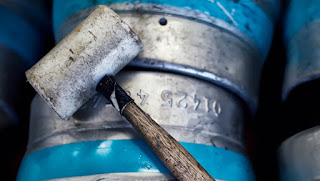 For example, if you get a job at Sambrooks you have to go through a pretty rigorous training program which has been developed over the last few years; as you might expect in other jobs but i get the impression not everyone cares too much about the little things that make all the difference.

So what's my job? Chief Taster? Master Pisshead? Nope not even close, I'm a Brewery Assistant. This means I do cleaning, racking, cleaning, more racking, more cleaning; after all, anyone who actually brews a decent beer will know that 85% of the process is cleaning and it just so happens that Sambrooks have people for just that role and i'm proud to be one of them!

I'm very happy with the situation, I'm learning from some pretty great brewers, i have a full time job in a respected brewery and i'm liking keeping a low profile for a change.

Posted by rabidbarfly at Thursday, June 18, 2015 No comments: