So the sly old bastard that is our current Chancellor of the Exchequer has announced that there will be no change to the duty paid on alcohol.

Now, some people, indeed some journalists(who should know better by the way) think this counts as a freeze on the duty.

This means that the 2% duty escalator is STILL in place and the duty will rise once again this year. Do not be fooled.

Thanks George, you spineless piece of shit!!

And on that note I'll leave you to the musings of the proper (adult)writers like Pete and ATJ etc...
Posted by rabidbarfly at Wednesday, March 21, 2012 8 comments:

Email ThisBlogThis!Share to TwitterShare to FacebookShare to Pinterest
Labels: George Osborne, Man of the People

Now, it's not often that I get 'all serious' on this blog so when I do, like now, you should ALL really sit up and take notice.

You will probably all have seen the STOP THE BEER DUTY ESCALATOR epetition that is doing the rounds at the moment and frankly unless you want to start paying £5 a pint, you should all sign it!

Pete Brown wrote a very good blog on the subject and like me, is understandably is getting a bit frustrated by the lack of support for this.

FACT : The price of a pint has gone up by 35%in the last 4 years. That in itself should shout at you to support this!

FACT : if the petition gets 100,000 signatures it will force a debate in parliament.

So sign this, get your friends and family to sign it and lets see what people power can actually do in a democratic society. 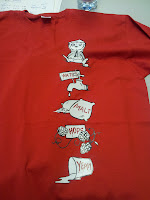 So a few weeks ago I saw a tweet from Tiny Rebel Brewing co asking people to guess the outcome of the Wales vs England 6 Nations match(no way was it a try by the way).

Tiny Rebel are Wales' newest brewery and I have to say they are making some rather large waves for people that until recently were brewing in their garage! Their Urban IPA is particularly impressive!

Anyway the prize was Tiny Rebel t-shirt sure enough today not one but two t-shirts arrived in the post!

Photo number one is the red t-shirt, now red's not really my colour but this one is different because it's educational n'all that. See it has the ingredients of beer on it! 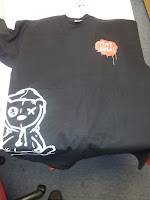 Picture number two, the black t-shirt, not as educational but with the Tiny Rebel logo emblazoned upon it, still fecking cool!

I'm going off to Newport in May to brew with Wales newest brewery and then they'll have a tap takeover in the Rake approximately 6 weeks later!

The date for your diary is Sunday 17th June (fathers day), what better way to celebrate with your old man than to bring him to The Rake for a pint or two!

More details will follow on The Rake's blog etc.. but until then I'm going to enjoy wearing my winnings!
Posted by rabidbarfly at Friday, March 09, 2012 4 comments:

Unfined Beer to be debated

Having just read this article on the Moor beer news page I have to say I completely agree with everything Justin has said.

If you don't want to click the link here are the three motions that Justin has tabled for debate.


Now we all know that some cloudy beer is down to the fact that the beer isn't being kept properly but lots of brewers are now producing beer that has a natural haze and a lot of it is bloody good beer. I'm not saying that all unfined beer is great, I'm not saying that all hazy beer is good. But isn't it time that we started trying to educate the Great British public on just how good beer can be, haze or no haze?
We can certainly start by getting an industry body such as SIBA to recognise the above.

I look forward to tales of heated debate and murders from the SIBA AGM today!
Posted by rabidbarfly at Wednesday, March 07, 2012 8 comments:

Yep, I'm actually going to go ahead with this and I'm starting off on Saturday March 31st at Craft Beer Company in Leather Lane and if you fancy a laff, by all means join me for a few!

I will be attempting to drink a half off of every tap in their not inconsiderable range.

This might sound easy but when you consider that Craft has 21 keg pumps and 16 cask pumps I could end up getting er...wrecked!

The challenge is doing this within opening hours and with 37 taps, i'll need to be doing 3.36 halves an hour, doesn't sound like much, does it?

Then of course I have to get home, which may be slightly more of a challenge!

So I'm being inspired by the Man v. Food television program to do something similar with beer. So what formats do I need to go with?


Most IBUs in a beer?
Sourest Lambic?
Hoppiest IPA?
Most extreme ingredients?
The most tasteless shit lager I have to force down my throat?
Why not all of them? If you have a challenge you want to see me attempt let me know. If there's anyone that wants to film me doing it let me know, who knows it might even be fun!
What could possibly go wrong? 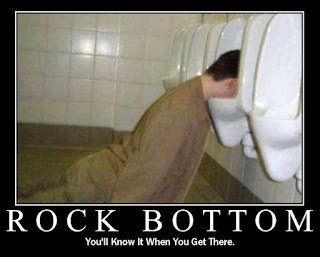 I'm getting properly old now. Yesterday was the start of The Rake's annual Welsh Beer Festival, a concept we came up with four years ago and haven't looked back since and I had a few sips of beer to celebrate Dewi Sant. But why am I getting old? Three pints I had yesterday and I am utterly ruined this morning, three pints!!! This is not good. This is very bad! It's not like I was drinking three pints of Sink the Bismark either(is there even that much left in the UK?). The strongest beer I had was 5%!

Suffice to say I'm sure I'll wake up even more hangin' tomorrow, what with the Tiny Rebel Urban IPA going on the bar today! Oh well, hair of the mutt anyone?
Posted by rabidbarfly at Friday, March 02, 2012 9 comments: