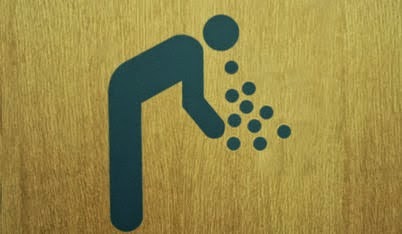 I'm here to amuse myself so I'm doing these again this year. By all means be boring and do a Golden Pints award(sounds like you're enjoying your piss too much though), these are the real awards people have been waiting for; the Raspberries to your Oscars, the AVN's to your Golden Globes, the Johnstons Paint Trophy to your FA Cup...

This year was particularly difficult as i was struck by the challenge of looking at recreating last years categories or creating completely new ones whilst not actually giving a shit about any of them! Eventually I decided that a mix of old and new would probably be more interesting for me er...you, Fearless Reader, so without any further ado, here are The Aspirational Lambic Awards, 2014!!

The Shia LeBeouf Award for Originality goes to : Anyone that's grown a fucking beard this year! and yes, I am jealous that my naturally Peter Pan looks don't allow this!

Best Bullshit in 140 Characters : The double act of @totalcurtis & @ChrisHallBeer has been particularly relentless this year.

How Many Craft Breweries Do We Have To Buy Before People Realise We're Craft? : AB Inbev or whatever it's called now.

Best Deserter of Normal Job For Job in The Beer Industry : NateDawg OF COURSE! Congrats dude, you'll have no life in no time!

There Must Be A Way To Use This Brewery As a Front For Illegal Activities... : You might know already, I couldn't possibly comment.

I'd Rather Have a Carling : Than anything from Greed Kerching.

The Dinosaur Award Because This Is All A Bit Tongue-In-Cheek : In A Pub Magazine and those toilets.

You Might As Well Read His Blog, Everyone Else Keeps Giving Him Awards So I Will Too! : Martyn Cornell.

The UKIP Award For Not Really Being Beer Nazis : Ratebeer.

So there they are, as i said last year, if you feel left out and really want an award, i'm unemployed now so cold, hard cash will work.

Peace and goodwill towards those who are less intelligent than you. i.e me.

So i read this article by someone i'd never heard of, this morning and whilst he says is all for the creeping Amercianism into British culture, he doesn't seem to like Americans and apparently he's a bit of a tight git when it comes to tipping bar staff.

Lets have a look at paragraph one, which ends with this sentence 'but we all have to draw the line somewhere and one thing that Americans can absolutely, definitely shove up their 'ass' is the growing menace of tipping in pubs'. Since when is it a menace to tip staff? It's a nice thing to do if you think you've had good service! Menace? Really? Over-react much, Tyers?

Tyers continues that he's discussed this phenomenon with men, British men, no less and that they didn't seem to have the same problem with tipping the bar staff that he does, they were more worried about the amount to tip. That's probably because they are nicer human beings than you, Mr Tyers!

My advice if you feel like tipping your bar tender is give what you feel is right, in the states it's a dollar a drink and whilst it can add up for the person being served the tips they get make up a large portion of their wages. We have a minimum wage in the UK so a safe bet would be ten percent of the bill, it's something i work to when i'm tipping anywhere but generally any tip (within reason) will be accepted as it shows a recognition of work being done and something that my bar teams used to do is collect towards a team night out so the tips, no mater how big or small would go into the pot.

Then he starts banging on about the wages of bar staff, something which as a former Bar tender, Supervisor, Manager and Operations Manager in the last 22 years, i can say with some authority is still a contentious issue for many employers and employees in pubs and bars up and down the UK. Let's face the fact that most bar staff in the UK get the minimum wage. This is partially down to how the job is viewed by many people in the UK. It's seen as a very transient job rather than a career. People in the UK just don't have the respect for the job that people in the states do. The work is just as hard, the hours are just as long and at time, the customers can be just as vile. How can someone who claims to have worked behind a bar be against tipping?

Let's have a look at the national minimum wage in the UK. Currently, for people over 21 it is £6.50 an hour, just £6.50! If you're younger than that the rate goes down to as low as £2.73 for apprentices! I'm all for a minimum wage, it can be a vital tool for smaller companies, helping them balance their income and expenditure more easily and is reasonably fair although personally i think the rate should be slightly higher so tipping your bar staff can be very helpful to those staff. i'm not for one minute advocating tipping shit service but £6.50 and hour isn't close to what some of these hard working people should be earning for the job they do. We lose hundreds, probably thousands of potentially great staff because in the UK service industry because the wages are terrible, why shouldn't we try to hold on to a few of them by tipping them a bit extra?

Moving on to the last paragraph of Alan Tyers nonsense, i might well say, to each their own in regards to tipping and i'd be right, if people want to tip, let them. If they don't feel they are able then they should not feel obliged to do so. obviously i don't want to hand over a tip to a sullen bar tender, no matter what country they are from, you gave away your UKIP tendencies there, Mr Tyers but lets also make the point they've probably been serving a massive arse like you all night.

Note : It has been pointed out in the comments below Alan Tyers article that he may just be spouting someone else's horse shit philosophy simply for reaction and blog hits. Being the old cynic i am, i find this eminently believable. So if this is the case lets not be too harsh on Mr Tyres, or maybe you should, i will leave that entirely up to you. To each their own.


Posted by rabidbarfly at Wednesday, December 10, 2014 No comments: