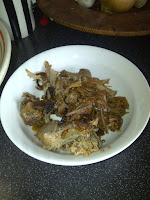 Sunday lunch was ace! I have leftovers to prove it and here they are.

Basically it's slow roasted pork that's been marinaded over night on top of Onions, Garlic and Apple. It's been marinading in chilli flakes, mustard seeds, garlic, more onions, cider and white wine vinegar.

It was slow cooked for 4 hours and turned into Sloppy Joe sarnies with homemade spicy slaw.

There was enough left for one persons lunch today, so whilst MrsRabidbarfly was out...hehehe. 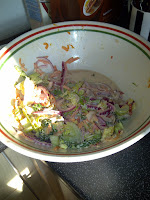 There was also some leftover spicy slaw so I was going to give it the Rabidbarfly treatment and do abso-fucking-lutely nothing to it. After all, it was good enough the first time round and it was certainly still good enough the second time round!

why the finely chopped chilli I added of course!

Now we get to the juncture that I cheated at. On Sunday MrsRabidbarfly had made, nay 'crafted' with her own fair hands, the buns that we used for the sandwiches. Now, me not having the time today, popped down to the shitty local tescburys and bought some buns.

I pan-fried the leftover pork until it was crispy (cooked, no salmonella here) stuck it in two buns and had the slaw on the side. Roberta's your Auntie! 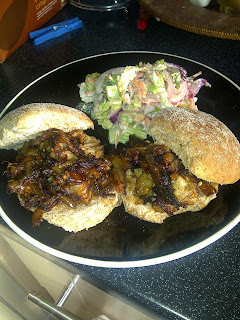 Note the healthiness of the meal, brown bread, coleslaw errrr....never mind, it was tasty! Especially when paired with this.....BOOYA!
You can find the recipe I used for the pork and the slaw here on the BBCs website.
Posted by rabidbarfly at Tuesday, February 07, 2012 2 comments:

At the moment, London is covered in snow, like a lot of the country if the weather girls are to be believed.
Bordering on the ridiculous, as usual. What beer would you drink during the Snopocalypse? After all a crisp layer of snow calls for a crisp beer! 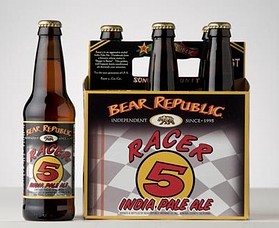 Why be obvious and go for an Imperial Russian Stout? It's unimaginative! I'm going for an IPA you all know and love (except you freaks out there and you know who you are), this IPA is so versatile that not only will it be matched with snow, it'll be matched with my pulled pork lunch(but more of that later)!
word to the wise though.....

And it's not even over yet!

First, British Guild of Beer Writers, Beer Writer of the Year, Ben McFarland goes all Metrosexual on us and declares the pint glass ugly and calls for some pretty glassware.
For the record, there is room for the pint glass and any other glassware that the Govt chooses to make legal and I also took great pleasure in offering to buy Ben a pint at The Bull in Highgate last night! I'm so hilarious.

Then our Government goes all PC and get rid of Slaters Top Totty off the bar in Strangers, the Parliament bar.
For the record there are much better beers with much better names out there, sorry Slaters but you just don't cut it for me.

As if that wasn't enough I've had a raging Beeriod all fucking day. Really not fair.
For the record. Fucking Ouch!


I've also just seen that the producers of The Hangover films are thinking of making it a trilogy.
Only three hangovers? Fucking amateurs!
Posted by rabidbarfly at Thursday, February 02, 2012 No comments:

Email ThisBlogThis!Share to TwitterShare to FacebookShare to Pinterest
Labels: a few quick thoughts

Oh, What a Wonderful Life.

I have a bastard behind the eyes. I have the shakes. I am fucked. I have Panadol. I have Coffee and if I don't take them, I'm going to die.

It is of course, all my own fault, hangovers are rarely other people's fault, despite the twittering hashtags #blamewotsisname which people use nowadays and I find mildly annoying.

In his book Man Walks Into a Pub, literary genius Pete Brown lists the different words for being pissed. Me in my less literary genius status am trying to think of various names for hangovers. Here are a few, if you have one you'd like to share, by all means do so.

'The gift that keeps on giving' - Neil Bowness
'The big wet dog' Boak and/or Bailey - WTF?
'DeadGhost' - Ghostie
'Hangin'
'Rough as nuts'
'a pig shat in my head'
'killed a few braincells last night'
'monged' - one of my staff that will remain nameless and no, I don't care what they do in their spare time ;)
'Cholera' - apparently this is what Graeme Coates calls his.
'Munted'
'Cunted'
'Beeriod' Thank you Nedley
'lotal trontal fobotamy' - Broadford Brewer - I can't even say that when I'm hangin'
'Like a cathedral' - One of Emmy's staff, lost in translation we think.
'Head like a bucket of wet sand' Raymond Chandler apparently via Boak and Bailey.
'Tom' because he causes so many of them - Chris Mair, which Tom?
'The Gremlin Boogie' PG Wodehouse via Boak and Bailey who seem to be getting well and truly into the spirit of this.
'The bad man' -Leigh
'Glynn' although Simon Johnson can't mean me, he added an extra N.
'Gazeboed' 'Cattled' 'it's Rabidbarflys fault' - Simon Bath thank you.
'we're fucked!' Chris 'Paladinofhelm Collins very good sir.
'Penmaenmwar' twitters CwrwLlyn
'La Quaglia' - Leo

What do you call yours?
Posted by rabidbarfly at Thursday, February 02, 2012 14 comments: