last night Mrs Rabidbarfly and I had the opportunity to go to a beer and food matching at one of our favourite Cape Town hang-outs, The Beerhouse on Long.

The Beerhouse crew were hosting Master brewer Wolfgang Koedel and some of his team from the CBC, that's Cape Brewing Co, with a seven(yes seven) course beer and food matching evening and with all due respect to anyone that's done one that i've been involved in or sampled, Chef Roy MacAskills pairings were, hands down, the best yet!

Course one was CBC Lager paired with a Salmon Rissotto. The beer is a fresh, light and clean lager which is very well balanced and the mildly sweet caramel notes from the malt really worked well with the sweetness of the risotto. I'm not the biggest fan of risotto usually but i really liked this a lot. Spot on and a great start!

Course Two was CBC Pilsner paired with a curried sweet potato and ginger soup with a parmesan crisp! Now this pilsner is fast becoming my go to beer over here, it's hop character and mild bitterness is so easy to drink and it's perfect for hot days of which you get a lot over here! The soup....THE SOUP! Wow, this was absolutely stunning! The sweet potato and ginger work so well together in a soup and the pilsner really cut through that sweetness and again between them Wolfgang and Roy had come up with another winning combo! Perfect!
Course Three was Krystal Weiss paired with Foie Gras Creme Brûlée with salted tomato and tarragon shortbread. This was only the second time i'd ever had Fois Gras and it was extremely good having been 'creme brulleed' by Roy and his team. The Krystal Weiss pairing was ok, the richness of the Foie Gras was offset nicely by the clean taste of the Krystal Weiss. The shortbread was as you'd expect, quite sweet and i'm not convinced it was required but it looked fantastic! Additionally it came with a cheeky shot of Grappa!

Course Four om nom nom nom, Amber weiss paired with Banoffi pie and an Amber Weiss and Apple sorbet! wow wow wow wow!! This was one sexy pairing and a dessert halfway through a meal? AWESOME! I could taste the bitterness of the beer in the sorbet and these two small things on one plate worked really well. The beer ain't too shabby either...

Course Six. Now when i looked at the sixth course i may have done a little excitement wee! CBC's IPA - Mandarina Bavaria, a beer i've had a few times now and is as good as any IPA around, paired with baby back ribs!! IPA and Pig! O.M.G. Seriously chaps, my cap is well and truly doffed and i may want to have your children! Sweet juicy ribs with a (excuse me, Chris Hall) sweet juicy banger! For. The. Win!
Course Seven was another exciting pairing for me, not only because it was another dessert but because i hadn't tried the beer until yesterday. It was the Imperial IPA paired with Lime posset and salted caramel!  The beer wasn't nearly as bitter as i had expected, even at 85 IBU's it didn't come across as too bitter for me! Paired with the sweet and fresh lime posset and salted caramel it was the perfect ending to a spectacular event.

What a great evening! Luckily we were sitting at the same table as Wolfgang for the event and he was a genuinely nice guy who clearly has a lot of passion for what he does. I hope that Cape Brewing co continues for a long time to come and i hope that one day they'll start exporting to the UK because these beers are very good indeed.
Special thanks go to Murray and his team at Beerhouse for accommodating us at the last minute, it's a very special bar in a city who's craft beer scene is just on the point of exploding, exciting times!
As i said at the top of the blog it's one of our favourite hang-outs and i cannot wait for the next MTB event!

if you're ever in town these folks can hook you up with some amazing beers!

Well, if John is the name of your head of marketing, JW Lees, I would blame him, i'd flog the fucker publicly if i were you. Let's all just take a moment to actually read this and take it in..... 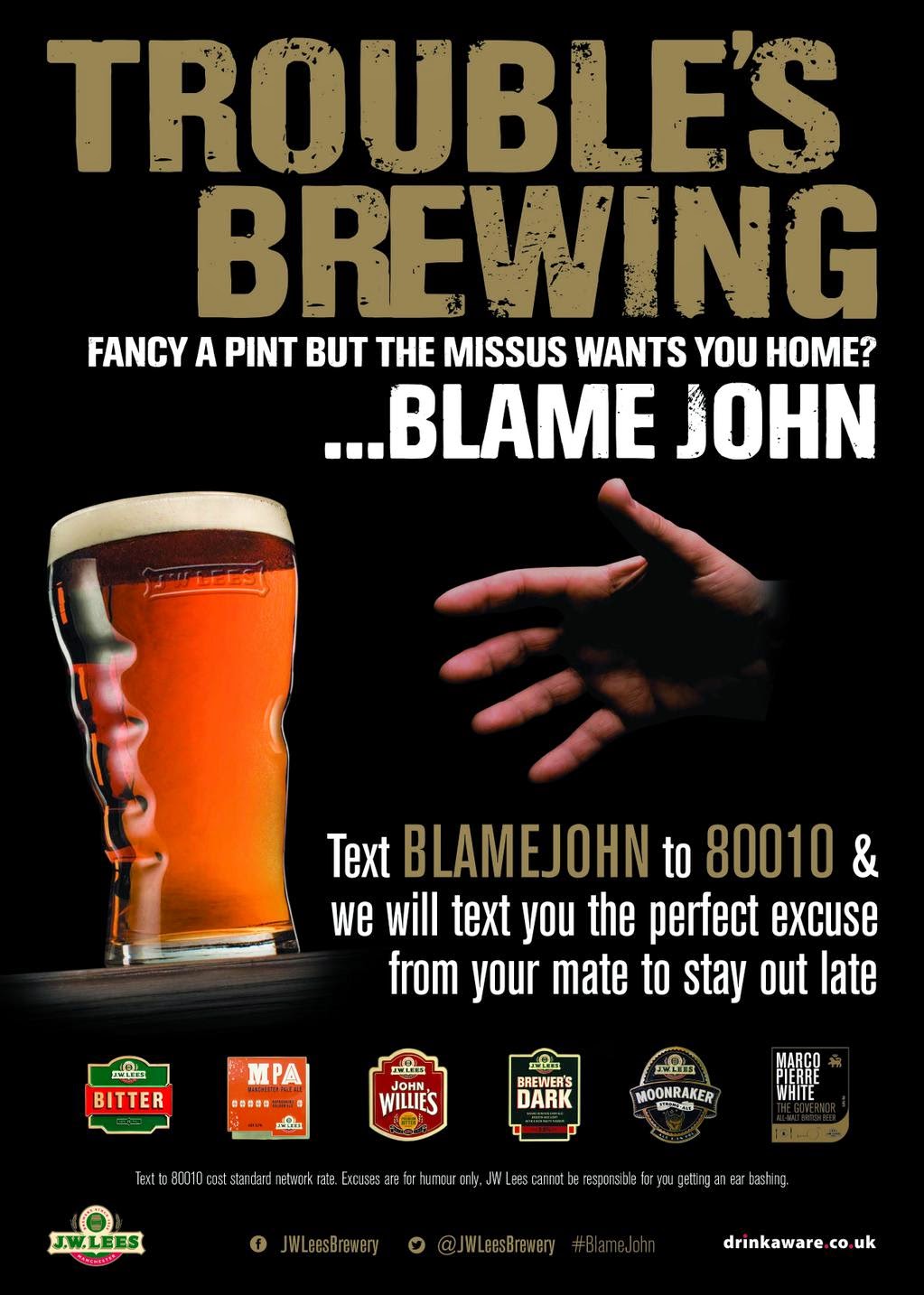 According to JW Lees it's just a bit of fun. Actually, it's utter rubbish, JW Lees, sack your marketing team, get with the 21st century and act like adults for a change instead of a bunch of naughty schoolboys.

Whilst i'm here, what the fuck is with that glass!!??
Posted by rabidbarfly at Wednesday, November 05, 2014 4 comments: