The Good, The Bad & The Greene Eyed Monster

Just read Pete Browns blog which included his visit to the Beer House pub in Waterloo the other day and what strikes me looking through the comments is that people are still feeling the need to define craft beer and indeed are having trouble with bigger (regional or family) brewers calling themselves craft.

Now, I was bleating about 'craft beer' or 'speciality beer' when i started at The Rake, over 5 years ago and i will be the first person to put his had up and say 'fuck that shit' now. I am so utterly bored of people arguing about this that it makes me want to put my fist through my laptop, don't worry, i know it's not worth it.

I really don't care if you think Brewdog are more craft than Brains or Greene King, as Pete so eloquently says, it's all about the intent and what i think people seem to conveniently forget is that these bigger breweries have got to where they are by (mostly) hard work and dedication. there seems to be a bit of Greene eyed monster(pardon the obvious pun) coming from people who are opening new smaller breweries and slagging off the big boys because they're just bigger. Yes they might be making more traditional ales for the most part but what do you care that they want to try and make something a bit more 'out there'? …Oh wait! I get it! You're scared they'll steal your business….they could argue that you're stealing theirs.

I'll be the first to say that i cannot stand Greene King beers, there's something about the beer that gives me belly ache nowadays and i don't particularly like the taste but i used to drink gallons of Greene King IPA back in the day and i'm not going to sit here and say Greene Fucking King are worse than any other brewery. They have their place as do the micros. After all they are at least consistent, not what a lot of craft breweries can claim to be.

When you open a brewery you do it for various reasons but there will always be one over riding reason, money. If you've opened a brewery because you think it'll be a romantic occupation that will get you laid at your Hackney warehouse parties, Fuck Off! Now, off you go….Human nature and indeed, life in most countries in the world depends on currency, there is a cost of living and making money is essential so anyone 'not in it for the money' is lying to you.

Do you think any of the micro breweries around at the moment would moan if they suddenly started making heaps of cash, nah, (as someone who part owns a micro) me either.

The main point I want to put out there is that we as the 'Alerati' for want of any other description - that's people who have enough knowledge and experience to be able to talk about both the micros and the mainstream should be putting the micro's out there for the rest of Britain to see, therefore making them mainstream eventually…Wouldn't you love to walk into ANY pub or bar and see an array of great beer on the bar? I know i would, rather than having to wedge my fat arse into one of the handful of tiny so-called craft beer bars that are packing people in and not overly comfortable.

To craft or not to craft, that seems to be the droning, unending question. Sigh.

I have posted this before but i think it needs re-circulating.

Dear 'Let There Be Beer' you will never be this well informed!
Posted by rabidbarfly at Friday, November 29, 2013 No comments:

Dark, bold, viscous, tonnes of chocolate, side of port and fantastic with a bit of blue cheese!

Scooper would have loved it! happy Birthday to the old bugger! x 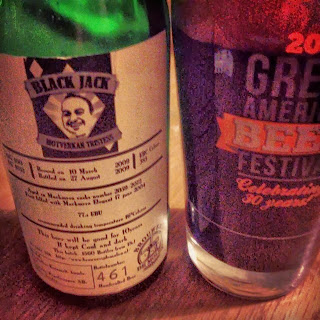 Posted by rabidbarfly at Monday, November 25, 2013 No comments:

So Mrs Rabidbarfly and I have had our kitchen done, and i found this little beauty in a box that had been packed away during the work, i'd totally forgotten it was there! There's some other more dubious stuff in the boxes but this looks like it'll be fun!


Anyone think we should have an 'Open it' session soon?

What's little gems have you got hiding in your cupboards? Feel free to share.
Posted by rabidbarfly at Monday, November 18, 2013 5 comments:

Because life's too short to drink shit beer!