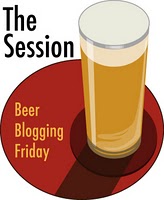 So I have a couple of minutes spare, although I don't know where from to be honest! Thought I'd try and get back in the swing of this blogging malarky! It's amazing how much time work takes up nowadays!
This months session is brought to us by Steve Lamond from Beers I've Known and the subject matter is once again a bit of fun - guilty pleasures or guilty secrets, call them what you may, we all have them and they do rear their ugly, unwanted head from time to time.

A couple of years ago I probably would have cited Guinness as my guilty secret but then I started doing the drunk diary in January and it quickly became apparent that I drank a lot of Guinness for want of any decent beer on the bar.

Nowadays my guilty secret and it's not really even that secret, is probably the fact that when I'm really thirsty, I don't go for a nice refreshing pint of lager, but rather a fruit beer, alcoholic ginger beer(sometimes for breakfast! Thank you Beaumonts for sorting me out on many a hungover occasion) or, shock horror, a cider!

However, I'm not one to really hold with the idea of guilty secrets, if you like a beer, then you like a beer, who cares what it is? I will say that if you have to hide the fact that you like a beer because your mates might not think it's cool means that you're not really giving the brewer of that beer the respect they deserve. Get over yourself and remember that somewhere, somebody will be thankful that you are drinking it!
Posted by rabidbarfly at Friday, November 04, 2011

drinking ale straight from the fermenter via the syphon tube, especially the ones with lots of American hops, that's my guilty pleasure. Get it while they're fresh!

indeed? I've done that a few times and really don't feel the least bit guilty about it! ;)

You know my guilty pleasure ?
About once a year, no more often than that, I get sick of drink.
I can never tell when that moment will arrive.
I can have been on the sauce for months, day in day out, pints here, wine there, liveners hither, sharpeners thither,ale,stout, wheat beers, dubbels, tripels, shampoo, gin and " is it that time already " tonic,one for the ditch, go on if you're twisting my arm, I don't care they all get horsed down day in day out.
But all of a sudden, when I least expect it and I'm fucked if I know when that moment will arrive, I find myself thinking " I'm sick of drink and I really fancy a cup of Darjeeling."
When it happens at ten o'clock at night it's seriously wierd.
But that's my guilty secret.
Fortunately it only happens about once a year.
Thank God.
Life would be too dull to always fancy a cup of tea.

You really should write your own blog PPT, thanks for the awesome comment.