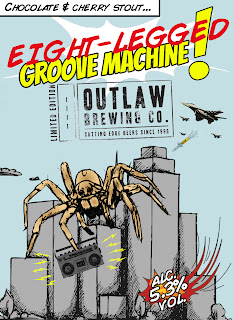 Yes, someone's been letting me play in their brewery again! This time the nice young men at Roosters let me brew a Chocolate/Cherry stout on their Outlaw pilot plant in honour of me old Ma's 60th birthday!

Why have I named it the Eight Legged Groove Machine? - well, me old Ma has 4 pet Tarantulas(Talula, Tranny, Piper & Jaws) and one of my favourite bands is The Wonderstuff, not very complicated is it.

Why Chocolate and Cherry? Why the heck not?? We decided that only quality chocolate should be used so 450g of Green and Blacks Organic Black Chocolate went into the 11 gallon brew! And of course only fresh cherries would do for this so, 1.3kg went in  after a few days of fermentation.

So how is the resulting beer? Well in the bottle I found it to have the hint of cherries on the nose and right at the back of the palate. But being a Stout, the main flavour is the Chocolate which gave the beer a nice chocolatey bitterness!

The one and only cask will be going on the bar at The Rake on Sunday 31st March at noon so if you've had enough of bashing your bunny at Brodies for the weekend, come along and give this one a try!

Oh my god how did I miss this, gutted!

You can start the petition to make it a permanent then! ;)

only if i can make mad hatter permanent too?