I was speaking to a brewer on the Faecesbook yesterday because i'd noticed that he was checking in to every single pub/bar etc... as he was delivering to them and i just wanted to congratulate him on letting his audience know where his beers were going.

so what? you ask, tonnes of them must do it....Do they though? If they are i'm not seeing them online doing this sort of basic task.

After all, small brewers don't have the marketing budgets of the larger ones and should really be using every single tool that they can, especially if it's social media and....free!

The brewer in question, and yes he's the brewer, drayman, dogsbody etc....was also telling his audience what he was delivering, gone from simple to simply genius in one small tap of a smartphone, right there.

So not only is he drumming up interest and possible trade for himself, he's letting his customers know which of his beers are where so they can drink them therefore drumming up trade for the pub or bar too.

There are several forms of of social media that support check-ins; Foursquare, Facebook, Yelp to name a few which let you check-in in real time, as you arrive, whilst you are there etc...So why don't you encourage your local brewer to use them!

The brewer I'm talking about is Sean Ayling of Pig and Porter brewery, a very good brewer who's 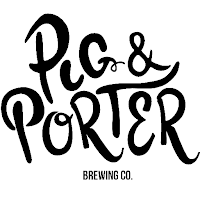 making some very good beers so i suggest if you're out and about in the next week or so you might want to check out the pubs he was delivering to today...

So there are just a few of them. if you're in Kent, keep an eye out for them, they're excellent! Follow them on Twitter, click on the links above!

I'm sure a load of brewers will grumble about time etc....what do i know etc... but seriously, i'm not sure where the 'losing' is here for small brewers; i for one would like to know where my favourite beers are going to be on draught when i get back to the uk in a few days!

Posted by rabidbarfly at Wednesday, December 16, 2015