Well well well, just found this story on twitter. Possibly the most depressing thing I have ever read. 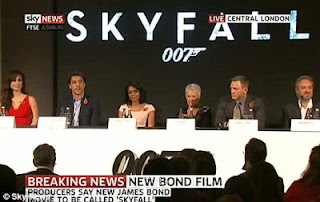 Apparently the James Bond franchise has signed a 15 year deal with beer giant Heineken that begins with the new film, Skyfall. So 007 will be drinking Lager instead of his legendary Martini, shaken not stirred.

Rubbish. I really cannot fathom how franchised everything is becoming, I find it really depressing. First football(Milton Keynes SCUM), now Britiains most iconic film franchise has been re-franchised.

Awful news. Whilst it depresses me, I am not surprised. Money makes the world go around I guess. *crawls back under rock and slits wrists*
Posted by rabidbarfly at Wednesday, April 04, 2012

Wait and see, he may still neck a Martini and have a jet pack.

Heineken is pretty much the global beer brand, available stateside, europe & Asia. It's not a surprise to see a global traveller neck one.

It's largely recovered into an authentic brand in the UK. A generation of drinkers are not aware of the old cooking lager version that used to be sold here.

The books do have him necking the local grog on his travels but the books have never been the films, and the exoticness of his post war travels doesn't translate to our modern easy jet market.

Bond isn't a beer geek, as is evident by his success with the ladies.

The vodka martini was created because Smirnoff's owners paid for it to be in Dr No. If product placement in films bothers you, don't watch any James Bond.

Cookie - agreed, speshly with the last line. Need to get an epetition for him asking for a local craft beer! ;p

It's difficult to imagine 007 walking round with a plastic bag full of Heineken! I suppose he went Audi some time ago.

Great football team you support by the way.

Profesor that made me laugh out loud. Just the thought of 007 and a placky bag full of lout!
Unfortunately AFC not exactly storming League 2 this year! But I have faith!

It's all about consolidation this year and probably next!

Yep, I said that all along, if we finish one place above the relegation zone, I'll be happy. Shitting myself, but happy. Just glad we have a club TBH.