Last Saturday night some friends of mine were playing a gig in a pub that we all used to drink in as teenagers. It brought back a lot of memories for me, some great and some pretty horrific imagery for me! As far as I remember I was never really one for the ladies, I was just an ordinary kid with ordinary problems (spots, bad dress sense, average all round) but I remember copping off with what I remember to be some of the most gorgeous girls that hung out in our group - how the fuck I managed this, I'll never know - indeed if I did know I'd probably be a Hugh Hefner style gazillionaire by now.
Every Friday night we would gather at The Rose and Crown in Tooting to go and get hammered, dance to the cheesy DJ that was on and hopefully pull a bird that you're mates would approve of. Young, dumb, full of well...you know.
Last night the DJ's crowd was all growed up and the DJ and the band were part of the crowd from 18/19 years ago.
In these perilous times customers come and go, as to breweries and pubs so it's nice to see my old local is still there, still open and still run by the same person!
Last time I saw Bernie was about the last time I was in his pub, so, 18/19 years ago. The softly spoken Irishman is a natural landlord, a true character in the pub trade. Someone the punters respect, someone the staff can count on and someone who can run a business!

But looking back at my 'yute' inspired me to compare two very different but very good breweries and their stouts. 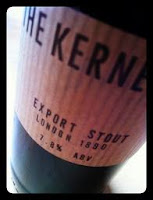 Kernel Export Stout, 7.1% abv.
Aroma - roasted coffee and chocolate, there's also some hop aromas there too, well it is a beer by Evin after all! Over all it's a beautifully well rounded beer that I think the unusual amount of hops for a stout really make the beer taste fresher and at 7.1% abv is far too easy to drink! 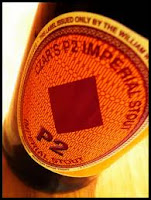 Worthingtons P2 Imperial Stout, 8% abv.
Lovely looking stout, blacker than a black thing with a nice creamy laced head on the top! Thinner and less bitter than I expected. Have to say I'm a little* disappointed at the lack of body and viscocity of the beer, after all I've heard amazing things about this beer. I guess I was believing the hype!

I may well compare their IPA's next... White Shield vs Kernel IPA anyone?


*only a little though.

Images taken from Leighs blog because they were the nicest I could find, hope he doesn't mind too much!
Posted by rabidbarfly at Wednesday, December 14, 2011