In a move that isn't at all like one of the macro-breweries taking over a micro brewery, today sees Draft House owner Charlie McVeigh hand over the reigns to David McDowell, the MD of BrewDog bars.

McDowell praised McVeigh in the press release circulated from the BrewDog website this morning saying "Charlie has done an absolutely amazing job building the business to this size, we had to break open all our ceramic piggy banks to be able to afford his brand" McDowell continued "Effectively though we are creating one killer team, ruining an awesome collection of craft beer bars!"

Reactions have been mixed to this news today with some people asking whether or not BrewDog will take out the cask beer taps in favour of more evil keg lines whilst others have asked excitedly, in true craft beer fashion, whether or not they will be able to use their 'Spoons Equity For Punks vouchers in the Draft Houses now.

Some people are even more cynical saying that BrewDog have only brought the Draft House chain so that they can get rid of the final million pints of Out Of Date Punk IPA they've been trying to force on people for god knows how long! 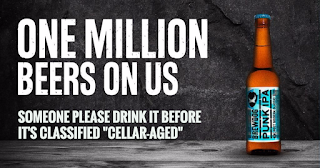 Time will tell we suppose.
Posted by rabidbarfly at Monday, March 26, 2018

'Joined forces'? I see they've got the hang of big company euphemisms too.

Vampires is not at all like in the movies or books. Sure, I understand. You are young you have the whole world open to you. You can be anything that you choose if you apply yourself and try hard to work toward that goal. But being a Vampire is not what it seems like. It’s a life full of good, and amazing things. We are as human as you are.. It’s not what you are that counts, But how you choose to be. Do you want a life full of interesting things? Do you want to have power and influence over others? To be charming and desirable? To have wealth, health, and longevity? contact the Vampires Lord on his Email: Richvampirekindom@gmail.com

My Name is Paula James from Canada, i turn to a vampire any time i want to, I become a real vampire because of how people treat me, This world is a wicked world and not fair to any body. At the snack of my finger things are made happened. Am now a powerful vampire and no one step on me without an apology goes free. I turn to human being also at any time i want to. And am one of the most dreaded and respected person in my country. i am now also very famous and rich with the help of the VAMPIRES EMPIRE. i get what ever a want. i become a vampire through the help of my friend who introduce me into a vampire Kingdom by given me their email: jamessuccessfultemple45@gmail.com, if you want to become a powerful and a real vampire kindly contact the vampire kingdom on their email: jamessuccessfultemple45@gmail.com for help. it is real. Contact them today. jamessuccessfultemple45@gmail.com

Welcome to ( New-World Vampire Kingdom). Do you want to be a vampire,still in human,having talented brain turning to a vampire in a good posture in ten mines time to a human again, with out delaying in a good human posture. A world of vampire where life get easier,we have made so many persons vampires and have turned them rich,you will assured long life and prosperity,you shall be made to be very sensitive to mental alertness,stronger and also very fast,you will not be restricted to walking at night only even at the very middle of broad day light you will be made to walk, this is an opportunity to have the human vampire virus to perform in a good posture.if you are interested contact us on vampireworld777@gmail.com

Good Day, Do You Want To Be A Vampire? Been A Vampire Will Make You Stronger. Think Faster. World Famous Will Never Experience Suffering Anymore In Your Life. Can Never Be Oppressed By Anyone Above All You Will Live Very Long on Earth And Be Protected All Through Your Life. For More Info About Been A Vampire & If You Interested On Been A Vampire Kindly Contact This Email Contact Me: realvampirekingdom1@gmail.com or on whatsapp +13656594152